But this is much more than just an average eWeLink smart switch: Woolley's WiFi light switch is a real special one, as the radar motion sensor built behind the touch panel detects even the slightest movement, and based on the detected motion it can turn on or off the lamp (or other electric device) and/or send an alarm to the smartphone. As a very close relative of the Sonoff brand, Woolley, uses the eWeLink app and cloud platform, so Woolley products can be used with the eWeLink app together with Sonoff, SmartWise and KingArt smart switches.

This is a 3-gang version with a white glass touch panel (without a frame), just as Sonoff TX T1 series.

It is equipped with an elegant, frameless white glass front panel with a touch switch on it. Thanks to its built-in WiFi chip, the eWeLink app running on an iOS (Apple) or Android mobile phone with an Internet connection allows you to remotely control the on / off of the light switch and set a timed on / off. With the help of the touch switch, we can of course switch the lights on the wall, just as we would with a traditional switch. Remote access can be shared with family members. You can program a timed on or off to make the outside world believe you are at home, so as a home presence simulation.

Woolley Wi-Fi smart switch does not include an RF receiver, so it cannot be paired with RF wireless switches. 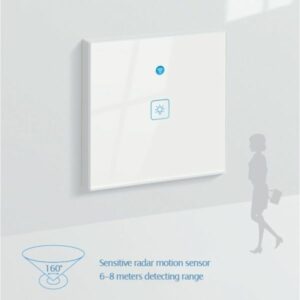 There are 4 modes of operations available, which you can set in the eWeLink app:

Like the Sonoff TX switches, Woolley switch with radar motion sensor switch can be switched to either momentary or toggle switching mode or set to auto-off (also called as inching).

Just as in the Sonoff TX switch series, the 2-gang and 3-gang switch versions can be set in the app to a so-called interlock mode, in which one circuit is switched off when the other circuits are switched. (In Interlock mode, timing features are not yet available in the eWeLink app.)

Analytical cookies for us to better craft the user experience based on your page view experiences.

I Agree or choose what to enable